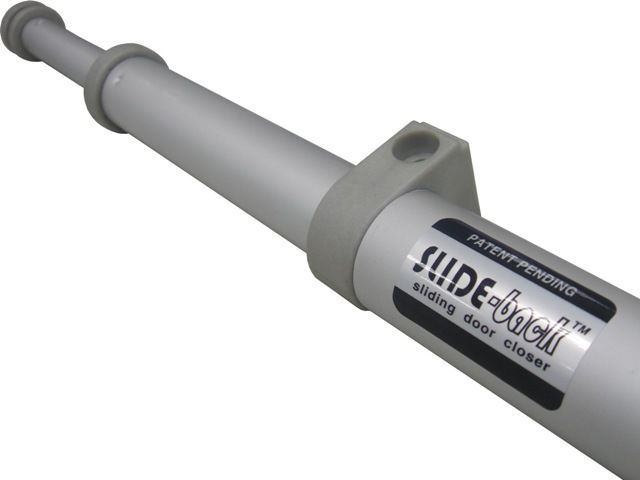 In order to make our product better and better, we keep improving our SLIDEback sliding door closer to have it integrate into our life as easier as possible.

WE are proud to introduce the synonym of the self-close sliding door closers - SLIDEback.

The SLIDEback was named in 2006, the product coded as SDC-280 which is our 1st generation of SLIDEback sliding door closer. The “SDC” is taken from the first letter of Sliding Door Closer, and “280” represents a body length of 28 inches.

The SDC-280 brings convenience to people's life by automatically closing the sliding door.
Provide a great solution for those who are tired of yelling at the people who don’t close the door.

The SDC-280 consists of a three-section metal telescopic tube that adopt the principle of air pressure deceleration to reduce the restoring force of the extension spring and form a force balance to achieve the purpose of automatically closing the door. No electricity is needed at all.

With such a simple structure, no electricity, no oil leakage concerns, no maintenance, simple installation, easy operation, wonderful but inexpensive product, It could upgrade the door become a self-closing automatic door, it has won a recommendation from many stores, restaurants and home users around the world.

The 1st Generation of SLIDEback, Item no.: SDC-280

The most obvious appearance is a small ball shape at the top of the tube. The shape of the Speed Control Valve is a rough recess hole at the end of the tube. Most of this generation's closers are connected to the doors by a short PIN, but this connection method is not stable enough to maintain the straight line level of the extension of the tube, and the connection is easily failed.

Although the 1st generation SLIDEback sliding door closer has a self-close function, there are many unsatisfactory issues in the quality. For example, it is hard to open the door with unstable closing speed and make the door bump into the door frame with the noise of the exhaust and so on.

The 2nd Generation of SLIDEback, Item no.: NSDC-280

The reason to name NSDC was that it was a NEW generation Sliding Door Closer, the N was therefore added ahead of SDC, became NSDC-280. It was launched and replaced the 1st Generation (SDC-280) in 2009.

The main improvements of the 2nd Generation are:

The reason to name 3SDC was that it was taken for the 3rd Generation Sliding Door Closer.
It was launched and replaced the 2nd Generation (NSDC-280) in 2011.

The main improvements of the 3rd Generation are:

The main improvements of 5 Series are as below:

The birth of the 6 Series is not to replace the 5 Series, but to increase the possibility of more applications for various types of sliding doors by different installing ways.
6 Series is positioned as higher level series of SLIDEback sliding door closer.

The main features include:

4 Series design combines the basic features of both 5 and 6 Series with an extra extension tube. Total 4 extending tubes design offers the possibility to apply for 3 panels sliding doors.

The main features include:

D&D has been offering customers high-quality door closer and hardware, both with advanced technology and 15 years of experience, D&D ensures each customer's demands are met.